When you think of your dog, what is the first characteristic that comes to mind? His “smile,” his gentle companionship, his good-natured bark when he sees a friend? Or, do you immediately think of his “bad habits”…?

[Getting in TTouch with Your Dog, by Linda Tellington-Jones] 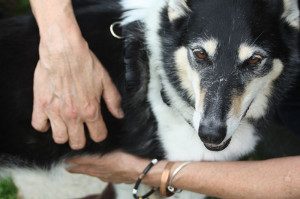 Tellington TTouch® uses a combination of circular touches, slides, and lifts, as well as movement and body wraps, to effect positive changes in stress levels, physical and emotional balance, and the ability to learn. When working with a human-animal team, TTouch enhances communication, focus, and connection.

Recent studies into the positive effects of novel stimulus on neurological disorders and pain management in humans provide new insights into the benefits of TTouch.

The Tellington Method was founded by Linda Tellington-Jones in the 1970s. Tellington-Jones brought together her knowledge of animals with an interest and background in Feldenkrais to increase an animal’s willingness and ability to learn in a painless and anxiety free environment. 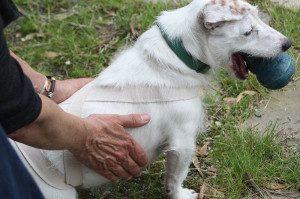 First developed for horses, The Tellington Method was brought to companion animals in the 80s. The work has extended to include rehabilitating wildlife and enhancing the well-being of animals in zoos. Ms. Tellington-Jones brought her work to the world of humans, generating a number of studies on the effects of  TTouch on brain waves.

Here are three blog reprints from NOVADog’s 2015 “See Spot Race” series if you’d like to read a little more about TTouch!