We’re delighted you’re here! Our goal for this course is to help you build a great relationship with your puppy while you both learn how to communicate with one another more effectively.

Puppy Kindergarten is designed for puppies and their people to join the class whenever the pup has completed his or her first round of shots. This is so that socialization to the big exciting world can begin during formative periods. We want puppies to have good experiences with all the new things they encounter in their young lives.

Each week the class will include:

We use clickers to mark the behaviors we like, and follow the click with a tiny food reward. Our puppies come to quickly love the sound of the click because it predicts a yummy treat. They learn to work to earn clicks and treats. We also teach our pups a verbal marker because there will be times that we want to mark a behavior, but don’t have a clicker, or don’t have a spare hand to make a click!

A bit of training geek info: Brain studies show that the sound a clicker makes affects the brain at a more primitive level than a verbal marker will. As a result the training effect of a clicker is more powerful. A verbal marker is great, but if you can use a clicker your training will be faster.

We are generous and stingy.

We are generous with the number of click/treats, using a high rate of reinforcement to train a new behavior or strengthen an older one that needs brushing up. We are stingy with the size of our food treats, though! A treat the size of a small pea is plenty. It is the frequency of reward that moves training forward.

We set the difficulty of whatever we are training at a level where our dogs will succeed, rather than setting the difficulty too high so that they fail. In a training model which involves setting the dog up to fail (or “misbehave”) so that they can be “corrected” (punished) the dogs may learn specific behaviors to fluency, but they become less willing to try new behaviors, and the relationship of trust between dog and human can be damaged or broken. We want to help our pups to practice a successful behavior on which we can build, gradually raising the bar, and creating a great relationship at the same time. 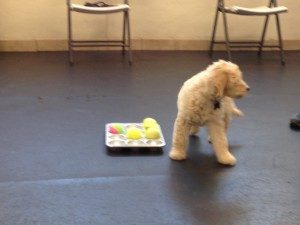